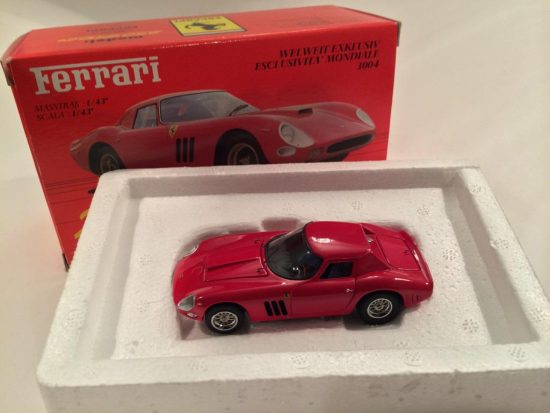 This  exceptionally detailed Jouef Evolution Ferrari 250 GTO 64 is in mint condition. Supplied in an excellent plus box. Now becoming very rare in this condition as not many were manufactured before the company went into administration.

Manufacturer Georges Huard founded Jouef in 1944 toward the end of World War II. The traditional home of the company was in Champagnole, France. In the early 1950s, as with many manufacturers, the company abandoned the use of lithographed tinplate for trains in favor of plastic injection moulding.

In 1979, Jouef opened a factory in Limerick, Ireland, but the ill-fated venture closed in 1981. In 2001, Jouef was subsumed by the Italian Lima. After shutting down in January 2004, Jouef was acquired a few months later by Hornby Railways.

Most of these castings, like the 1973 Porsche 911 Carrera RS 2,7 litre were later acquired by Universal Hobbies of Kowloon, Hong Kong and marketed during the late 1990s as the Eagle’s Race line, which featured a silver chrome-like Eagle on the company logo.

There are no reviews yet, would you like to submit yours?

This site uses Akismet to reduce spam. Learn how your comment data is processed.

We use cookies to ensure that we give you the best experience on our website. If you continue to use this site we will assume that you are happy with it.Ok